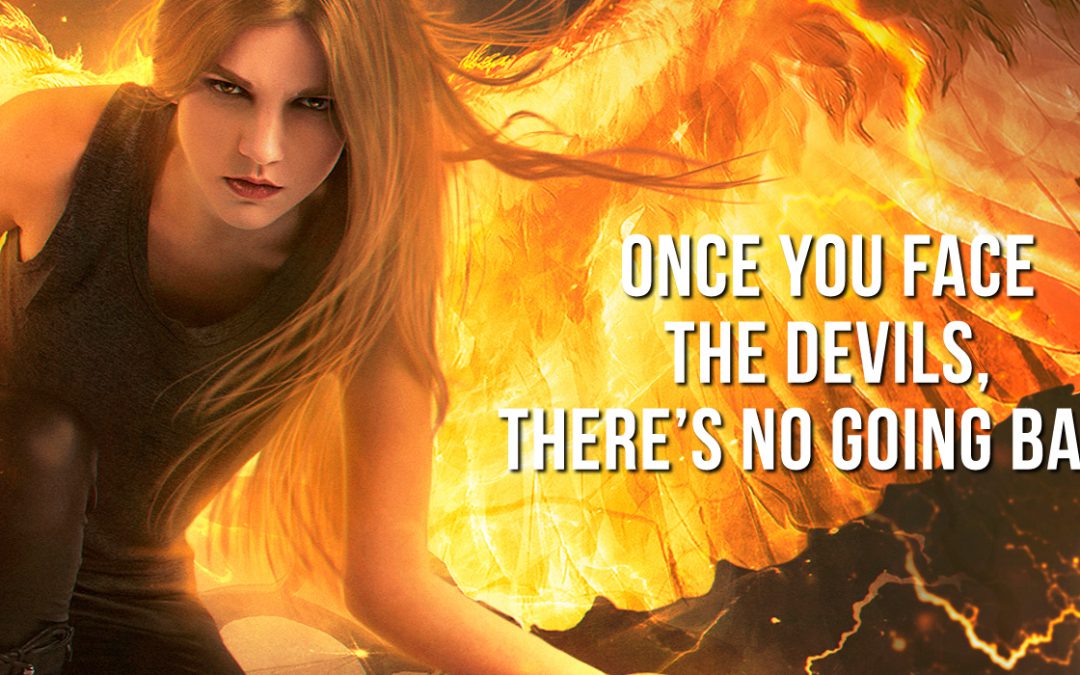 Once you face the devils, there’s no going back.

Guardian angel Ava Lightway has spent a century watching over her charges, whispering the words of the gods in their ears. But her peaceful existence ends when she’s assigned to Liam Striker, a supernatural detective with no memory of his past.

Liam might be Ava’s biggest challenge yet. Stubborn and dangerously captivating, he’ll stop at nothing to find the demon who murdered his father. Even if it costs him his life.

Keeping death away from her new partner is an impossible task. And even if their investigation doesn’t destroy Ava, succumbing to Liam’s smoldering touch just may.

GET IT ON AMAZON

I’m really happy to share this story with you guys!

Yaaas, it’s finally here! I even made CHIBIS to celebrate! What do you think? Also, an excerpt below 😀

The stench of stale beer and sweat invaded Ava’s nostrils as she moved toward the bar. A football game played on the screen behind the counter, but none of the three men populating the pub paid any attention to it.

The air inside was musty, old, and it only worsened as she approached the end of the room.

She passed by the first man, who sat in a booth on the left. He stared at nothing in particular, with a cry stuck midway in his throat and a half-empty jug of beer clutched in his hand. The bad lighting drenched half of him in shadows, making it seem like darkness was swallowing him.

He didn’t notice Ava because she had masked her presence before entering. She wasn’t exactly invisible. Humans could see her if they focused hard enough, but they rarely did.

Ava made a mental note to check up on that poor soul if she had the chance, her Guardian instincts urging her to help. He was clearly suffering, but she was here for a reason, and the reason was not that man. So she went back to the task at hand.

The wooden floor creaked as she approached the bar. The bartender, an old man with white hair and a face marred by deep wrinkles, cleaned a dirty glass from behind the counter.

She wasn’t here for him, either.

The last man sat hunched at the edge of the counter. Well, he wasn’t exactly a man. According to his file, he was a Selfless, an angel whose memories had been wiped out so he could be reborn as a human—standard procedure, considering centuries of memories could overload a human brain.

She stopped by his side and sat on the red padded stool to his left. The seat’s ripped leather grazed the white fabric of her bodysuit, scratching her thighs.

The man was hunched over, so she couldn’t see much of him except for his strong build and dark hair. He took a long gulp of his drink and didn’t acknowledge her presence for a while.

“Archie isn’t dead yet,” he finally said, his voice rough like a cement wall.

“He’s not dead,” the man repeated, his attention solely on what was left of his whiskey.

She took a deep breath. “I know, Liam.” She used her Guardian voice, the calm, soothing tone to which she had grown accustomed. It was how she talked to her charges, how every guardian angel spoke, actually. Using the same serene tone.

Liam turned to Ava, his brow furrowed and his lips twisted, and for a moment too quick to count, she lost her breath. Ava had seen his photo on file, but the live version of him was brutally handsome. Liam was a cool wind on a summer morning and a thunder waiting to crack. His features were all sharp angles and fierce lines, but his eyes … Ava had never seen eyes like those. Rough emeralds cut with razor-sharp precision, almost like crystalline water, if water were green.

“Don’t call me by my name,” he spoke through gritted teeth. “You don’t know me.”

“You’re right, and I apologize.” She patted her thighs as if she were fixing the apron of an invisible dress. “I only read your file, but I’d like to get to know you, Liam.”

“You’re a Guardian,” he scoffed and took a sip of his drink.

“I am,” she said, ignoring the contempt in his tone. “However, the word the Messenger used when he assigned you as my charge was ‘temporary partner’.”

“You’re not my partner,” he barked through tight lips. “Archie is.”

He glared at her, certainly because she had used Archibald’s name and his. This seemed to be a sensitive matter to her new charge, so she calmly added, “I can’t replace your partner. No one can.” Ava extended her hand to him. “I’m Ava, by the way. And I’m here to help.”

GET IT ON AMAZON