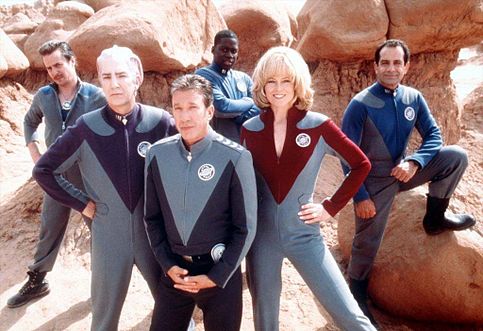 As long as you don’t give up, you haven’t lost.

I know, what a cliché #amiright? But hear me out for just a sec.

Perseverance is important as duck (see how I cleverly replaced the F for a D? If you haven’t,now you have.)

Anyway, I was thinking about Graham Moore’s Oscars’ speech, you, know, the “Stay weird, stay different” one. Which brought me back to Tim Allen’s one liner in Galaxy Quest (a great Star Trek parody, by the way) where he says “Never  give up, never surrender.”

You know, a lot of people say those words, but they don’t really mean it, and I guess what I want to tell you today is to mean it. And eventually, whatever your goals are, they will happen.

Weeeeell, I kind of do. We all think we’re so unique, right? And we are, but at the same time, we kind of aren’t.

See, every person on this Earth goes through shit in their lives (at some point or another), and here’s the trick: The levels of shit are infinite and the majority of shit isn’t easy to relate to or maybe it is, but that doesn’t matter. It’s still classified as shit because it’s shit to the person experiencing the shit. Makes sense?

But eventually, we will.

As long as we stay true to ourselves and never give up.

Besides, it’s a really nice journey. Tough as hell, but totally worth it. I guess those of us who manage to reach old age come to realize that we set our goals to set our journey. You know why? Because in the end, we’re seeking journeys, not goals.

So never give up, never surrender. Stay true to yourself, and stay weird and stay different. Respect other people’s battles and make sure to enjoy the ride.