Why I Write Romantic Stuff- Part 1 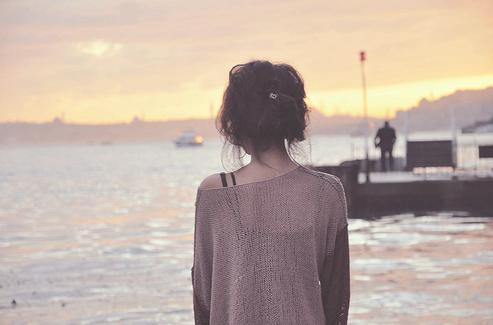 It all started on a shitty New Year’s Eve party.

They only served Red Bull and Vodka which are two of my favorite drinks in Hell. The music was a mix of bad rap and mellow rock, not to mention that people were way too drunk. The only good thing about that party was the location: the club stood on a stretch of land that ventured farther into the ocean. Here’s a pic:

So there I was, up on that rock, when fireworks started bursting overhead and everyone welcomed the New Year.

Not really. I felt like CRAP. I hated my job, I still lived with my parents, and I had ended a relationship only a few weeks before.

No to mention that watching fireworks by the ocean during New Year’s Eve was so excessively romantic, it would’ve made Nicholas Sparks hurl pink glitter. And as you know, seeing romantic stuff when you’re single is the equivalent of plucking your eyes out, filling them with meatballs, and waiting for the ravens to come and feed.

I quickly decided dancing was the only solution to my blues, even if the music was crap. So off I went to the dance floor.

That’s when I saw him, or better yet, he saw me.

“You’re beautiful,” he said in German, and I figured that this dude had to be batshit drunk, because he was talking in the language of Jesus or whatever.

He laughed and repeated the sentence in English, and I was all like, “Aw, he thinks I’m pretty.”

So we danced and talked. He was funny and cute (blond, blue eyes, and an adorable dimpled chin). When he looked at me, I felt… you know the feeling you get when you return home after travelling for a really long time? You know, when you remove your shoes, drop on the sofa and reach nirvana, just because you’re home?

That’s how that stranger made me feel. So we talked and danced a little more. I made some jokes because I’m dorky like that, and he actually laughed at my awkward humor(!) In turn, I laughed at his–he was as crazy as I was!

At some point, he asked for my number.

Look, I NEVER gave my number to guys at parties, but on that day, I GAVE him my freaking number. Not a fake number, no, my REAL one.

He phoned me right after to make sure the number was good, and I was all like, “A worthy opponent at last.”

Now, 2008 might’ve been a crappy year to me, but it had been even worse to my friend, and as her bestie, I had to be there for her. We had agreed on a no-men policy for the evening (you know, girl power, F the patriarchy, that kind of thing).

And as they say, besties before bros.

So I told him I had to go and be with my friend, effectively ditching him. This might sound crazy to you, but I was so blinded by my misery, that I couldn’t see him for who he really was, not fully and not just yet.

What can I say, people do stupid things, and I’m a person, so I qualify.

Just before I left, he held my hand, put it to his heart and asked me to stay.

Even after that wonderfully cinematic moment, I didn’t. Yeah,  even bestie was all like, “Girl, ya dumb.”

I soon realized that I had made a monumental mistake. He was cute and adorable, and crazy as it sounded, I missed him already.

The numbness that had governed my life up to that point slowly faded, and my vision cleared. That’s when the bitter taste of a missed chance flooded my mouth, burned down my throat and made my stomach clench.

I tried looking for him, but there were too many people at that party, people everywhere, clouding my vision and standing between me and him.

Much like Houdini, he was gone. And I never saw him again that night. END OF PART ONE

PS: This is a true story, I kid you not.